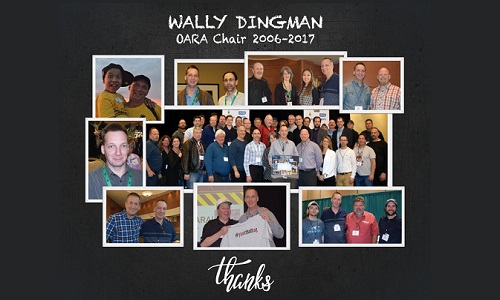 Toronto, Ontario — May 9, 2018 — Asked to reflect on his greatest contribution to the auto recycling community, Wally Dingman, who served as the chair of OARA for eleven years, finds it difficult to provide an answer. Difficult, because, as he puts it, “Everything I’ve done with OARA has been a team effort.”

To be fair to him, it isn’t just humility that makes it a difficult question to answer. Dingman has –alongside fellow OARA members – certainly accomplished an immense amount.

For one thing, he has made an impact on government policies. He was part of the group that successfully pushed for the enacting of ELV processor regulation that has been implemented in Ontario. He also repatriated the Car Heaven and the Cherubs database from Scout Environmental, and CAREC and Retire Your Ride from Environment Canada.

He played a key role in setting up and helping to disperse more than $300,000 in environmental rebates to OARA members for capital acquisitions and improvements.

He oversaw OARA’s successful charitable programs, including the Tire Take Back and the $1 million dollars raised to the Sunshine Foundation. He helped to create the employee scholarship fund, which has raised almost $200,000 in 8 years.

Not only does he now serve as the chair of the Auto Recyclers of Canada board of directors, but he played an important role in the founding of this magazine.

For Dingman’s peers during his time on the OARA board, his humility about his accomplishments is of no concern. In fact, they honoured him with a plaque celebrating them, and many have come forward to share their thoughts on his accomplishments and leadership.

“What do I feel Wally brought to OARA as a leader? Perseverance, longevity and dedication to the association and industry. Wally is a great role model for future association volunteers. OARA’s strongest accomplishment during his tenure as chair was hard work creating sustainable and fair licensing system for an unregulated industry,” says Dom Vetere of Dom’s Auto Parts, former board member.

“As a leader, Wally Dingman brought infectious passion for the advancement of Automotive Recyclers and the membership of OARA. Our strongest accomplishment during Wally’s tenure as chair was attaining Regulation 85/16 under the Environmental Protection Act,” says Greg Woodbeck of Woodbeck Auto Parts, current OARA chair.

“Having had the opportunity to work on the board with Wally in his early years I was fortunate enough to witness a true energetic and passionate leader at his best. Wally bled OARA and I thank him for what he was able to accomplish for all members,” says Mike Carconne of Carconne’s Auto Recycling, former board member.

“Wally has one of the most analytic minds I have ever encountered. When push comes to shove, I would follow him into any battle. Wally instilled confidence in the members of the association while developing EASR. It will be our responsibility to make sure the program is kept on track, where we can still be profitable while working with the regulation,” says Mary Poirier of Valley Automotive, current board treasurer.