Natalie Miller reflects on the industry during a time of change

This year, Canadian Auto Recyclers names Natalie Miller of Miller Auto Recycling in Fort Erie, Ontario as Woman of the Industry for 2020. Recently named as the Auto Recycler’s Association’s Canadian representative, Miller has previously served on ARA’s Educational Planning Committee for the past two years. As well, she is actively on the Board of Directors for the Ontario Auto Recyclers Association.

Canadian Auto Recycler’s recently caught up with Natalie to hear her take on her time as a business leader, the role of Canadians in the ARA, the challenges facing women in the auto recycling sector, and her thoughts on the future of the industry.

On her proudest moment as a business leader:

I have to say the way our team handled the initial COVID outbreak in March makes me proud as a business leader. There was a moment for myself, and our team when we realized that everything was changing and we needed to respond quickly. With every decision and action, there were new challenges that arose.

We made efficiency and procedural changes immediately, which unfortunately included laying off some staff initially. However, once the government grants and wage subsidies were announced then clearly outlined, we were able to maintain our level of staff from that point on. There is certainly no
better team building exercise than facing the challenges of this pandemic.

On the industry’s biggest challenges at the moment:

You will hear this often from recyclers right now, but for good reason— salvage procurement has become so incredibly challenging. When on conference calls or in conversation with recyclers all over the Canada, and the US, the same message resonates ‘It is hard to buy, if not near impossible.”

The pandemic immediately resulted in less vehicles on the road, which then resulted in a significant decline in the availability of salvage at the auctions. The real question is, “what is this going to look like in the longterm for all recyclers?” It is certainly an area of concern for all recyclers, and our industry as a whole.

On her new role with the ARA:

“I’ve just started my new role as the Canadian representative, replacing Dalbert Livingstone. But I have been involved in the ARA’s Education Planning Committee for a while. It’s been really interesting to see what the ARA is doing for the US and for auto recyclers throughout North America. Two years ago, Sandy Blalock asked me to co-chair the planning committee. I was flattered and said, ‘I’ll take it.’

The truth is, I don’t even know how my name came up. I remember getting a message from Steve Fletcher who congratulated me on being at the top of the shortlist—and had no idea I was even being considered.”

On the challenges facing woman of the industry:

“When I started in the industry, it felt very male dominated, at that point there were only two strong, successful female yard owners in Ontario. Mary Poirier from Valley Automotive being one, she remains incredibly supportive of myself in the industry to this day as well as other women entering the industry.

As I became more involved with peer groups, conventions and other industry related events throughout Canada and the US, it was evident over the years that more women are representing the auto recycling industry in a variety of roles. Most recently, my involvement with the ARA Board of Directors has provided the privilege of working with such accomplished women as Sandy Blalock and Shan McMillion.

Mentors have a big role to play for anyone entering this industry—especially women. At my very first OARA meeting in 2009, I was approached by Becky Berube of UCC. She was just wonderful to me, and we shared some terrific conversation. At that time, I was not even in the family business yet and my knowledge and experience remained very limited. She was happy to answer my questions and learn more about my background.

For the past two years, we served as co-chairs of the ARA Education Planning Committee.

Aside from women supporting women in the industry, hands down there have been many male colleagues who have been great mentors. The first one that comes to mind is Marty Hollingshead, he is a passionate, knowledge and progressive auto recycler from outside of Chicago. Marty has visited our operation and provided valuable input, then he was more than gracious in sharing his knowledge when I was able to visit his facility a few years ago. In my early years in auto recycling, I always felt there was an assumption that if you could not do all aspects of the operation then it was a fault in my abilities. I am so grateful to many of my colleague’s male and female for demystifying this for me.

With time, I have learned to take this as an opportunity to reverse the question and learn about the individual who initially posed the question, and their business.

It’s true—I don’t actually inventory the parts, but that doesn’t mean I am not capable of running things from a bigger picture perspective. Plenty of women are out there inventorying parts—but I’m more interested in reshaping the business.

I used to be more defensive. Now, men who sit down with me often say, ‘yeah, so you actually know what you’re talking about.’” 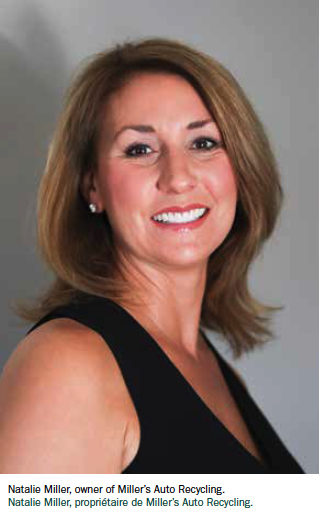 THIS YEAR, CANADIAN AUTO RECYCLERS NAMES NATALIE MILLER OF MILLER AUTO RECYCLING IN FORT ERIE, ONTARIO AS WOMAN OF THE INDUSTRY FOR 2020. 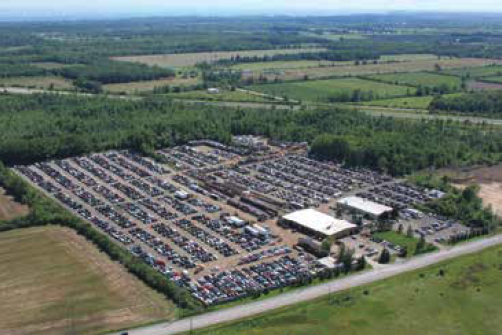 Canberra, Australia — While the Canadian auto industry spent a much-needed long weekend with family and friends for Canada Day,

Verona, New York — Calling all east coast auto recyclers, the ARNE Summit and Expo 2022 is officially on the