The Société de transport de Montréal (STM) will renew a quarter of its bus fleet by 2021, resulting in nearly 500 EOV to be recycled. 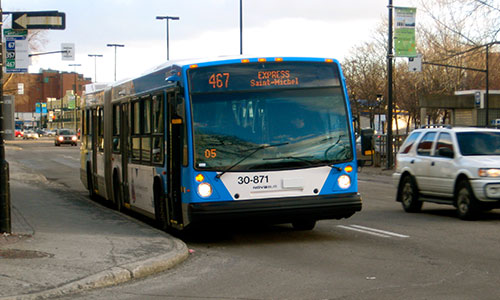 According to a statement published in October, nearly 500 used buses will have to come out of the garages. This is 10 times more than the 44 buses that the STM has rid itself of since 2014.

STM spokesman Philippe Déry describes this variation as “normal”. The number of discarded buses “fluctuates from one year to the next, depending on the average age of the vehicles and their mileage,” he says.

The provincial government is partially funding the renewal of buses after 16 years of use. “All the stolen buses will be replaced,” says Déry.

These buses are to be recycled, based on the interest shown by three companies automotive recyclign companies specializing in vehicle recycling. In addition to 490 Montreal buses, the STM is responsible for selling the buses of seven other Quebec transportation companies. In all, nearly 1,000 buses are to be auctioned to recyclers.

Jean-Lys Carrière, head of administration and business planning for the Société de transport de Laval (STL), contradicts this estimate. “Earlier this year, we got between $ 3,000 and $ 4,000 per vehicle,” says Carrière. The three recycling companies in the running – American Iron & Metal Company, Groupe Lussier and Total Metal Recovery – have confirmed they want to buy more than 950 buses. A transaction that could range between $ 1 million and $ 4 million.

Groupe Lussier proposes to export mechanical parts (such as engine and transmission) to countries in development, where they will be reused.

Total Metal Recovery and American Iron & Metal Company specialize rather in sorting scrap metal. All metals, including reusable parts, would be swallowed up by the shredder.

For Simon Matte, President of the the Association of Auto Part Recyclers in Quebec (ARPAC) the resale of parts “extends the life” of old buses. According to the latter, this would be the most ecological option going forward.

For more information on the STM, please visit stm.info.