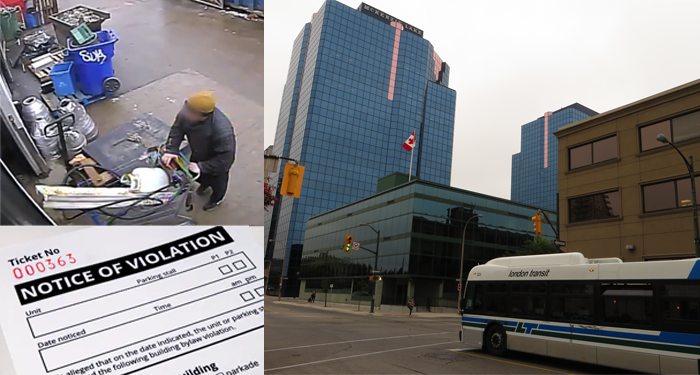 London, Ontario — A recycling business manager in London, Ont. was left “insulted” after an undercover bylaw officer charged his facility in a sting operation.

Charlie Gelinas is the manager of Specialized Recycling, a business targeted by undercover officers in January as the city aimed to crack down on the illegal sale of stolen goods, particularly catalytic converters, which are being stolen from parked cars and quickly sold to recycling facilities for quick cash.

Gelinas said, back in January, a man wearing old track pants and sneakers pushing a shopping cart showed up at his door looking to sell a handful of materials. In his possession were a rotten fluorescent light, a piece of wire and a propane tank.

“When my scale guy asked him for his name, he lied about it,” Gelinas said of the disguised bylaw officer.

Specialized Recycling purchased the materials for five dollars, though Gelinas said they were worth half of that⁠—his attendant paid the man double as an act of kindness, as the man seemed like he may be sleeping rough.

A week later, the man showed up at his business again and revealed he was a bylaw enforcement officer. He then issued a ticket for purchasing the material without verifying the seller’s identity.

“I was completed disgusting that the city would besmirch itself by acting in such a fashion,” said Gelinas. “It should be beneath the dignity of our city officials to try and entrap small businesses by manufacturing charges.”

Facing a rise in scrap metal thefts in London, the city launched a month-long blitz that led to charges against five businesses for offences that included accepting scrap without verifying identification, failure to keep transaction records and operating without a business license.

Bylaw officials slapped the salvage yards with $350 fines but chose not to reveal the names of the businesses.

London poverty advocates are also questioning the tactics, saying the city’s actions were in poor taste and may have done more harm than good.

Lazenby said what bothers her most in the context in which the undercover enforcement happened.

“I think it disproportionately targets the people who are just looking for a couple of bucks to get through the day,” she said. “Why isn’t someone showing up with a catalytic converter? That would be more of the tactic I would expect if that were the concern.”

Another facility manager also spoke out against the city’s tactics.

At John Zubick’s Limited, one of the other five yards charged in the enforcement blitz, the undercover officer arrived with more than 80 pounds of metal goods, according to facility manager Luke Zubick.

“To me, it looked like a gentleman cleaning up his garage,” said Zubick. “We try not to judge here.”

The 80 pounds of metal included a few bike frames, an aluminum radiator and some tin⁠—worth about six dollars, in all. Zubick said at first staff said no, but the man insisted.

“I told him this time only, we were going to make an exception,” he said. “I was trying to be nice and they’ve taught me not to be nice.”

Zubick said kindness bought his business a nearly $400 fine, along with a pledge to never sell to anyone without ID.

“It’s a lesson for us,” he said. “We won’t take anything right now without a driver’s license, which unfortunately singles out a lot of people.”