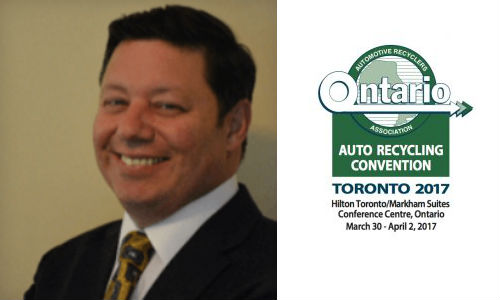 London, Ontario — November 9, 2016 — The Ontario Automotive Recyclers Association (OARA) is already gearing up for its conference this spring and the event promises to offer recyclers even more than in previous years. The annual OARA conference is the largest automotive recycling event in the country, frequently drawing attendees from other provinces.

First, OARA has announced a collaboration with Hollander to bring the Hollander Training Summit to Canada. The event will be hosted within the OARA Annual Convention and Trade Show scheduled for March 30 to April 1, 2017 at Hilton Toronto/Markham Suites Conference Centre in Markham, Ontario.

“Hollander is a Platinum sponsor at the OARA Convention and we have worked closely with them over the years to bring quality education to auto recyclers. By partnering directly with Hollander during our Convention we can bring the best industry training to the best auto recyclers. Canadian recyclers will want to be in Toronto on April 1 next year,” said Steve Fletcher, Executive Director of OARA.

Previous summits held in Philadelphia, Orlando, Atlanta, Houston and Minneapolis have been very well received by the auto recycling industry. Hollander Training Summits are designed for users of any level, employees and owners alike, encompassing basic and advanced concepts in Hollander solutions. Breaking down the summit, experts in products such as Powerlink, EDEN and eLink conduct sessions in different category tracks spanning one day. Sessions cover topics such as inventory, system management, online part strategy, cores and Hollander Production Management.

“Hollander is proud to be sponsor of OARA and offer a Hollander Training Summit to our Canadian customers,” said Chris Budion, Vice President of Sales for Hollander. “The Summit is a great opportunity to share training, tips and insights directly so our customers can take full advantage of their Hollander solutions.”

OARA has also announced that Paul D’Adamo from Recycling Growth has been named as the keynote speaker for the 2017 OARA Convention. D’Adamo has been in the automotive recycling business for 27 years as an owner at Bill’s Auto Parts in Cumberland, Rhode Island. The company was sold to Pick’n Pull in 2013 and he stayed on as New England Regional Manager for PNP.

In addition, he and his wife Lynn are the owners of Recycling Growth, a consulting, coaching and training company that serves the auto recycling industry.

D’Adamo will provide two seminars over the Friday and Saturday at the event. The first, “Is it time for the Heimlich Maneuver on your inventory?” takes a look at efficiencies that can eliminate bottlenecks. The second is “Don’t feed the monkey: a boot camp for owners, managers and key employees.” The seminar encourages attendees to spend some time to take stock in themselves and identify which “monkeys” they are carrying and which ones are dragging them down.

OARA has also announced that it is planning several Roundtable discussions for owners and staff that D’Adamo will help to facilitate.

For more information on the 2017 OARA Conference and Exposition, please visit oara.com/events/2017-oara-convention-trade-show.