The Automotive Recyclers of Canada are playing with plastics

I n our society, many find the act of throwing the lid of their coffee cup in the recycling and the cup in the garbage is a borderline reflex. It doesn’t feel right to put one in the other’s spot when you know better.

And yet when it comes to thousand-pound metal-bound machines full of plastic, chemicals and precious metals, we seem to not have much trouble turning a blind eye.

Vehicles are full of plastic consumers often don’t think about, from fixtures beneath the seats to cupholders and the dashboard itself—all things that we are readily willing to throw away, even when salvage is an option.

While Canada’s automotive recyclers aren’t as hasty to throw away precious plastics, the general practice sees plastic components like side mirrors,

interior door controls, cupholders and other miscellaneous bits resold to customers as opposed to processed for recycling.

As of November 2021, a study commissioned by Environment and Climate Change Canada (ECCC), and carried out by Dillion Consulting, found that about nine percent of Canada’s plastic waste can be attributed to the transportation sector.

The Automotive Recyclers of Canada have since responded with the “Roadmap to Increase Recycling of Auto Plastics from End of Life Vehicles in Canada”, a multi-faceted plan with financial support from the federal government through ECCC’s Zero Plastic Waste Initiative.

Through conducting the research to develop this roadmap, ARC will be able to accurately assess and adjust existing goals to match the reality of the current automotive plastic recycling climate.

The first step of the plan involved getting a lay of the land for how auto recyclers are currently conducting their plastic recycling business through a survey of the more than 500 businesses currently identified as active in the ELV sector.

According to Steve Fletcher, managing director of the ARC, the survey was “super successful.”

“The consultants were just blown away that there’s that level of interest in recycling more automotive plastics,” he said. “The consensus had been that our members couldn’t care less about plastic—it just doesn’t make any money for them.

“As it turns out, they’re dedicated to the project because they’re dedicated to the initiative of advancing the industry and supporting ARC,” added Fletcher. Following the survey, ARC is carrying out “tear down research” at Standard Auto Wreckers Port Hope in order to determine what the most commonly scrapped vehicles are, and which interior plastic components could be removed and inventoried prior to the shredding process.

“David Gold [owner of Standard Auto Wreckers], was hugely supportive of the project, in terms of opening up his facility for us and allocating people to it,” said Fletcher.

“They dismantled four cars and dug far deep than they typically would. The whole process was timed. They’re in the process now of weighing and evaluating the plastics and working with a pile of plastic recyclers to put value behind it all.”

A fifth vehicle was placed in the yard after a standard dismantling procedure, to which the Standard team was then told to “go crazy” on and get as much plastic off as they could in four hours.

“It’s low hanging fruit,” said Fletcher. With the results of the tear down research, ARC can then compare its findings with methods used in different international plastic recycling markets to develop a set of best practices for the Canadian market.

The final stage then involves compiling the findings from the first three stages into a five-year roadmap that will lay out concrete targets for the elimination of plastic waste from the ELV process and inject in-demand plastic components back into the market for customers. 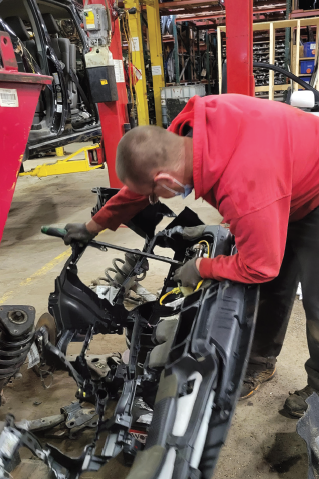 “Ultimately, the goal is to determine how much of these plastics that are removed from ELVs, can be recycled and put back into the circular economy,” said Fletcher.

Typically, the largest plastic components removed from a vehicle are bumper covers and fuel tanks. Part of the roadmap’s goal will be to work alongside OEMs where and what type of plastics their vehicles contain, as well as the determination as to which components should be shredded and which can be salvaged.

Ongoing parts shortages and staffing constraints as a result of the COVID-19 pandemic have already led some Canadian recyclers to begin salvaging and inventorying minor plastic components that, while typically of secondary priority in the repair process, have been quite hard to come by over the past two years.

Fletcher expects the organization’s research plan to be completed and ready for implementation by March 31.