Circular Economy: What goes around, comes around 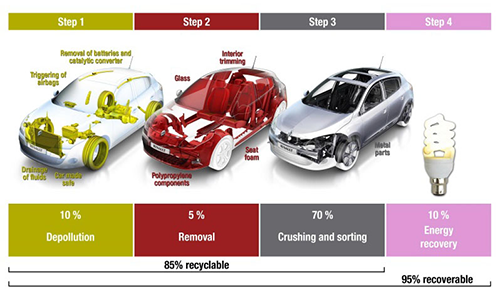 The evolution of the circular economy, which dates back to the 1970s, is now a driving force for one of the fastest growing global economic trends. The basic tenet of a circular economy framework is to recover all products, components and materials at their highest utility and value.

This philosophy rejects the old linear model of “take, make, waste” and instead favours quality products and materials that can be reutilized rather than simply disposed of in a landfill.

In the automotive industry, there is potential for significant new revenue streams if original equipment manufacturers (OEMs) truly embrace circular economy concepts. Recycling associations have argued this point to the OEMs and other industry stakeholders for quite some time.

Regrettably, almost every automotive manufacturer has chosen to put blinders on and disregard the purest form of circular economy philosophy by rejecting the reuse of the quality OEM parts they themselves produced.

In recent years, auto manufacturers have chosen to release or revise position statements on recycled and salvage OEM parts. These attacks on recycled parts significantly backtrack on the manufacturers’ economic stewardship commitments to conserve resources and protect the global environment. They also contradict many of their publicly stated environmental principles.

Despite touting commitments to the basic tenets of a circular economy, it seems many of the OEMs now oppose the fundamental reutilization of their company’s very own parts once they have left a dealership. There are vast opportunities to embrace parts reuse and circular economy principles.

In a 2016 document “Automotive’s latest model: Redefining competitiveness through the circular economy”, the global professional services company Accenture indicated that “potential revenue of selected circular economy business models for automotive companies could more than double by 2030, growing by $400 to 600 billion.”

Many manufacturers still seem to be allergic to auto recycling, but not every OEM thinks the same way. Renault, for example, has developed a network capable of supporting closed loop recycling. Instead of planning for disposal at the end of their product’s life, Renault strategizes to reuse, repair or re-manufacture. The last generation and next generation are part of the same circular production process.

Renault thinks of “waste” products as a resource. It remains to be seen if other OEMs will follow suit and reap the benefits that will surely flow.