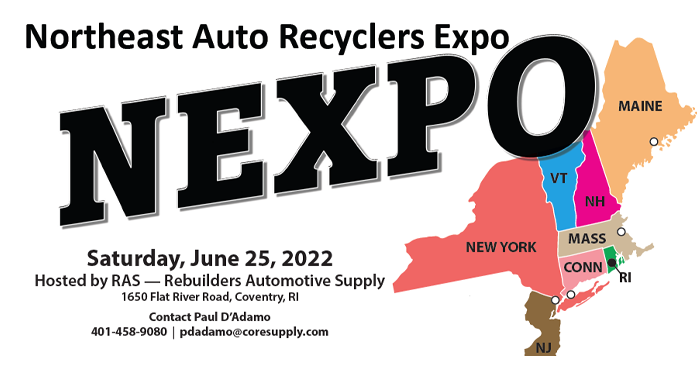 Coventry, Rhode Island — Leave room in late June; you may just have a date with the Ocean State, as the Northeast Auto Recyclers Expo (NEXPO) gets set to take over Rebuilders Automotive Supply (RAS) in Coventry, R.I. for the region’s can’t-miss industry event. With a full day of programming and exhibitions planned for June […]

On the OARA Guest List: It’s not too late to register

Calgary, Alberta — Get your boots on because the Canadian Association of Recycling Industries is back in the saddle with the 81st edition of the association’s annual convention, as early registration opened on Tuesday. Featuring a number of industry-relevant presentations, including a keynote address from former minister of foreign affairs John Baird, this year’s CARI […]

Whitehorse, Yukon ⁠— After recognizing the sheer volume of abandoned vehicles in Yukon’s landfills, on roadsides and in forests, the territory’s auto recyclers are working to clear the problem. “[There are] growing piles of metal, growing piles of cars,” Ralph Charleston of Raven Recycling Society told CBC’s The National. “We’re just trying to catch up […]

Truro, Nova Scotia — President of Maritime Auto Parts Andrew MacDonald and his wife Katie are taking recycled tires to a new level⁠—ground-level, that is. Since 1996, Nova Scotia’s tires have been processed and recycled by Divert Nova Scotia (Divert NS). According to the organization, more than one million used tires are diverted from the […]

New Orleans, Louisana — Registration for the United Recyclers Group’s 2022 Training Conference is now open. The conference will take place from April 7 through 9, 2022, at the Hyatt Regency New Orleans. URG is promising two days of expert training, award-winning speakers, networking opportunities, exhibitors and mixers. For more information on the conference, please […]