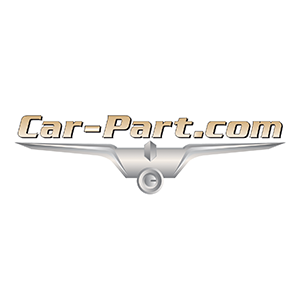 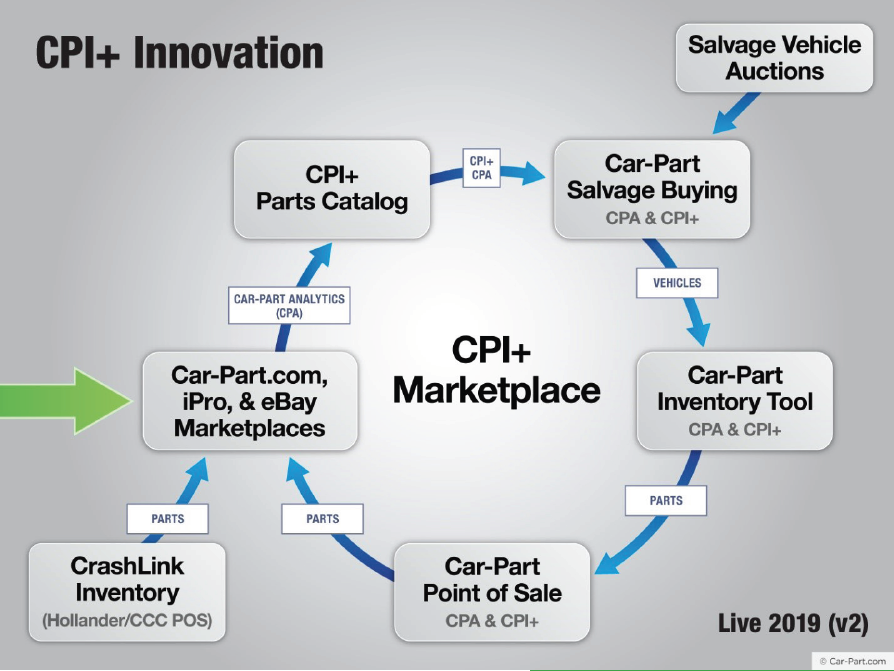 The North American auto recycling industry is part of several circular economies that operate in parallel, provide synergy with each other, and drive positive feedback loops.

These circular economies include:

• The overall vehicle circular economy wherein end-of-life vehicles (ELVs) are processed, and parts are reused to repair vehicles on the road

• The claims circular economy wherein accidents occur, and vehicles are either declared a Total Loss (and become an ELV) or they are repaired and provide opportunity to reuse recycled parts in those vehicles

The CPI+ Innovation diagram shows how Car-Part.com applied the circular economy concepts and Car-Part Analytics (CPA) from its marketplace demand data to design its Car-Part Interchange Plus (CPI+) system. This diagram also shows how CPA and CPI+ power all Car-Part.com marketplaces and its auto recycler management system tools.

In the three short years since CPI+ Version 2 was launched, the Car-Part.com website has seen significant growth in quoted recycled part dollars from CPI+. The company has also seen an increase of “part in stock” percentage, growing from 1/3 of CPI+ part searches having in-stock parts, to more than two-thirds of the CPI+ searches having in-stock parts. These results demonstrate the power of the positive feedback loop that exists in circular economies.

The claims circular economy adds other layers of complexity to recycled parts utilization. Insurance companies have policies that restrict the use of certain recycled parts such as air bags while allowing other recycled parts, such as doors. Estimating systems are designed to work at the component level (OEM part number level), whereas many recycled parts are sold as assemblies in order to optimize the economics of reuse. New vehicle technology only increases the complexity. For example, a front collision impact may have had three components reliably replaced by bumper assembly (bumper cover, reinforcement bar, and impact absorber) or it may have more than 50 components replaced by a bumper assembly for newer, more complex vehicles. Getting that technology right at the part number level can be the difference between getting the sale or not.

IN THE THREE SHORT YEARS SINCE CPI+ VERSION 2 WAS LAUNCHED, THE CAR-PART.COM WEBSITE HAS SEEN SIGNIFICANT GROWTH IN QUOTED RECYCLED PART DOLLARS FROM CPI+.

• iPro marketplace now has insurance company policies built into the marketplace, so repairers and insurers automatically restrict part choices to parts that meet their policy

• iPro’s assembly automation feature automatically associates the correct components with the recycled assembly, thereby simplifying the process of sourcing ACCURATE recycled parts (this capability is implemented for many major body parts, and more assemblies are being automated in each interchange release)

As vehicles add new features, more high dollar parts are available for reuse and sale as recycled parts. There is an explosion of new features on vehicles, which provides a corresponding opportunity for recycled parts. The $martList inventory feature takes these opportunities into account based on which parts have actual demand at the interchange level, and the cost to process the parts, including extracting the parts from the vehicle. Recyclers can customize their costs based on their individual situation. Using this feedback loop from interchange-based demand, through interchange-based vehicle buying, and interchange-based inventory recommendations, gives recyclers the ability to optimize their opportunities at the part number level (where the recycled parts marketplace operates). This is combined with opportunities at the vehicle level for optimal ELV purchases. Inventorying optimally is the key to selling optimally in online marketplaces (and to the collision repair industry), and automation is the key to optimization. Predictive analytics (i.e., using data-driven algorithms built into the workflow) is the best way to optimize operations in this increasingly complex environment.