Burnaby, British Columbia – The mid-70s saw the start of the Lebanese Civil War, which was around the time Salim Abu-Ata was running a successful Fiat dealership in Beirut. Salim knew once rumours of a civil war came to a head, he would have to leave his business to ensure his children’s safety. In 1979, Salim, […]

Toronto, Ontario – EZ Suite is excited to announce two new additions to their team with Chris Atencio and Laurie Woods joining the company in management positions, according to a press release issued last week. Atencio will be taking the lead as director of sales while Woods will be responsible for customer relations while at EZ. […]

Recyclers, Get Ready: ARA’s 77th annual convention is around the corner

Manassas, Virginia ⁠— The Automotive Recycler’s Association (ARA) is just under a month away from its first-ever virtual convention, which will be held from November 11 through 13. The convention, titled EDGE 2020, will offer opportunities to learn from industry experts, network with peers from across North America and a chance to participate in an exposition […] 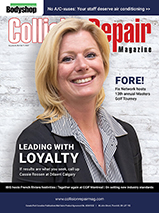